What is the Core? 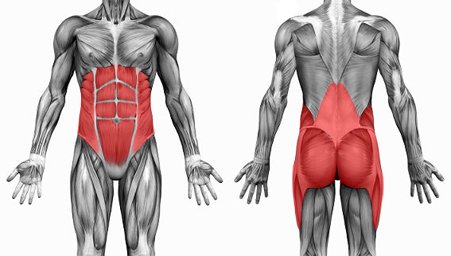 Core strengthening or stabilization has become the buzz phrase in a lot of gyms and fitness classes. But what is it and what is it’s job? Think of the core as a canister. The top of the canister is the diaphragm. Yes, the diaphragm is a muscle and it is an important one! Not only does it help us breathe but it also is very important in having a strong core. The bottom of the canister is the pelvic floor muscles. There are three layers of muscles and their primary job is to keep us continent and to support our internal organs. The walls of the canister are made up of transverse abdominus, internal obliques, multifidus, gluteus medius/minimus and deep hip muscles. The main foll of all of these muscles are to provide a stable base from which to move. To be able to walk, reach for an object, get dressed or participate in any sporting activity, your core muscles activate to hold you stable and balanced. Weakness and instability in the core muscles leads to injury to joints and soft tissue. Weakness in core muscles can lead you to lose your balance and fall, strain your back or your neck. Peaple with weak core muscles tend to have chronic issues with their spine including neck pain and headaches, poor posture and low back pain.

How do you train these muscles to work properly? It is important to work with someone who can cue you correctly. We are great at compensating with stronger muscles whose primary job is not stabilization and this leads to injuries. A qualified physical therapist, pilates instructor or personal trainer can help you learn how to activate the muscles properly. But here are three tips to start you off.

Tip #1: With your hands on your lower ribs, take a deep breath in feeling the ribs expanding laterally into your hands. As you exhale feel your hands come back together. Practicing this and improving on rib excursion during deep breathing activates the diaphragm, one of the most important muscles in the core.

Tip #2: Stand up with good posture. Don’t force it by sticking your chest out or arching your low back. Stand naturally and then pull your belly button in towards your spine as if you were tightening your belt. Try not to move your rib cage or your pelvis while you do that. This is a subtle move and if you were doing this in a crowd of people, they wouldn’t even notice you doing it.

Tip #3: This may be the easiest. Squeeze your buttocks. In standing, sitting or lying down, tighten up those cheeks. This activates the gluts which are part of your core muscles. When contracting them, neighboring muscles also activate helping you have a more stable core.

For more info or help getting a stronger core, contact Jenn Lane at jennlane@holisticpt.net.